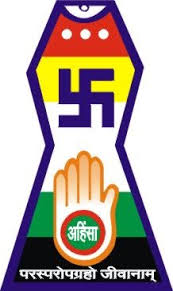 1. Jains believe that all living beings, from plants to animals to bacteria, have souls, and that, theoretically, all souls have the potential to attain nirvana.

2. Jain doctrine holds that Jainism has always existed and always will exist. There is no creator god or a god as judge, and Jains do not “worship” any particular being, but admire and aspire to be like the liberated souls that have attained nirvana.

3. Karmas in Jainism are actually particulate matter that attach to the soul. Karma is the cause of suffering in the world, but it is not a form of judgment or punishment, simply the natural consequence of our thoughts, words, and actions, negative or positive.

4. Jainism maintains that there are multiple universes. We live in Bharat Kshetra, which is one of the three universes that has the potential for religion. It is possible for us to be reborn in any of the universes.

5. In Jainism, the swastika has a different meaning than it does in the other Indian religions. The four quadrants/dots represent the four gatis or states of existence (humans, heavenly beings, plants/animals/etc., and hellish beings). Souls can pass through any or all of the four gatis throughout the cycle of birth and death, and all are merely temporary states of being.

6. This symbol of organized Jainism also represents the Jain conception of the universe. From top to bottom, there is moksha (the realm of liberated souls), devaloka (the realm of heavenly beings), the mid-level where Earth exists, and naraki (the realm of hellish beings). Apart from moksha, one’s soul can expect to pass through any or all of these realms.

7. Jains have a number of dietary restrictions, which most Jains follow to whatever extent they desire. Aside from following strict vegetarianism, many Jains do not consume root vegetables, eggs, honey, mushrooms, unfiltered water, or mind-altering substances (drugs, alcohol). Dairy products are acceptable, but some Jains opt for veganism due to modern factory farming practices. Some Indian cuisine, especially Gujarati cuisine, has been influenced by Jain food.

8. A small number of Jains in India voluntarily fast to the death, a practice known as santhara, which is the strongest example of Jain extremism. These individuals give up their own physical existence to avoid causing suffering to other beings (plants). This practice is not illegal in India but there’s quite a bit of controversy around it.

9. The legal status of Jainism as a minority religion in India is also controversial. For decades, state and federal governments treated Jainism and Buddhism as denominations of Hinduism rather than as separate religions. In 2006, the Supreme Court determined that Jainism is not a part of Hinduism. However, minority status would grant Jains access to certain benefits intended for underprivileged groups, and Jains as a group are not underprivileged.

11. There are somewhere between 5 and 10 million Jains in the world. Compared to the small proportion of the population they have, the influence of Jains in Indian culture is completely disproportionate.

12. Belgian Jains originating from the Gujarati city of Palanpur control around 60% of the world’s rough diamond trade.

13. Jains are the most educated religious group in India, and among the richest in America.

14. In Jainism, each atman is said to be indescribably perfect and, when not obstructed by karma, existing in a state of perfect bliss and knowledge.

15. Since all atman are identical, it follows that even though different living organisms are bound in different ways by karma, one must treat all living beings with kindness and respect. (Or at least, avoid harming them.)

16. The way to reach moksha in Jainism requires not only ridding oneself of bad karma (paap) but also removing all good karma (punya).

17. Some Jains will fast for very long periods of time. The most I’ve seen from anyone in my local community is 30 days. It is considered good to donate the money not spent on food to the poor, although not everyone does this.

18. One thing that bothers many non-Jains is that propensity of Jain clergy to go to extreme lengths to avoid harming living beings. They go barefoot and carry a small broom to avoid crushing insects in their path. Many will wear pieces of cloth called muhapattis over their mouth (see below) while speaking to that the warm air of their breath doesn’t disturb surrounding microorganisms in the air.

19. According to the Digambara sect of Jainism – most famous for having its clergy go naked – there is no more Jain canon. It went extinct after the partial failure of the Council of Pataliputra, which was held to gather together the most important Jain literature, which had previously been passed on through oral tradition. Many Digambaras believe all existing Jain texts are corrupt.

20. One of the main influences on Mahatma Gandhi’s philosophy of satyagraha was Shrimad Rajchandra, a Jain man who penned one of the most important recent Jain religious texts, Atmasiddhi.

Other Posts Related to Jain:

Some facts about Jain Dharm (in Hindi) 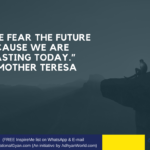 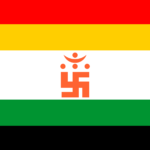